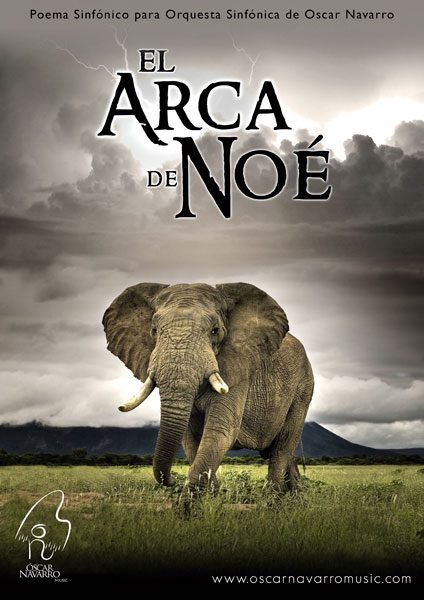 During these measures the music puts us on a distant mountain where Noah is (theme played by the english horn) receiving the tragic news of the great Flood that will ravage the whole Earth. After a few minutes of emotional music, the image brings us closer to a more detailed picture of God’s words to Noah in “The Word of God”.

The lower section of the orchestra embodies God speaking his last words to Noah with the background sound of celestial bells. After his last words we go on to observe the animals that inhabit the Earth through the eyes of Noah.

For these measures the music plunges us into the great ocean populated by dolphins, whales and other creatures that inhabit them describing the wonderful sea bottom, with the incessant play of the dolphins and other animals. After this section, the music fades until night covers the whole face of the Earth (in the distance the bells announce midnight). Once the animals are on the ark with         Noah and his family, they just need to wait for the great Flood to come upon them.

The warm melody is provided by the french horn and light interventions with a flute and piccolo mimicking the call of birds, now have us inside the ark. During the last hours sitting on the Earth, one hears the soft melody provided by the clarinet, later the bassoon and then finally the cello solos that burst into a great fortissimo of the entire orchestra, interrupted by small raindrops that             announce “The Storm”.

The image of the great Flood now puts us outside of the ark: a huge storm is completely destroying the Earth, the wrath of God has      no boundaries and destroys everything in its path (in these seconds of music we hear the melody, which the work had previously offered in the english horn and is now, with great fury, in the orchestra’s basses).

Again we go back inside the ark (measure 263), listening to the general nervousness and especially the sound of the elephants, again played by the french horns section.

After the great catastrophe, a new world opens before Noah‘s eyes. This gentle melody played by the french horn and the call of the dove (portamento of the flute) in the distance, heralds the resurgence of new valleys and plains before the eyes of the future   inhabitants of the Earth.