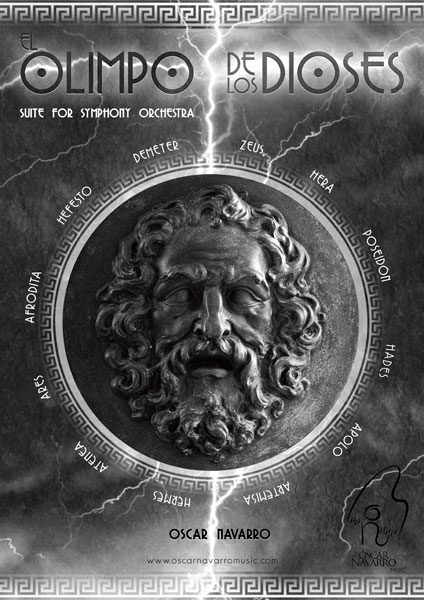 “Olympus of the Gods” is a Symphonic Suite divided in ten movements, each one of them representing one of the twelve deities in Olympus.

The suite begins with a strong “thunder” sound, which represents the power and strength of the great God Zeus, father of Gods. This “thunder” sound will be the connecting thread between movements, and it will be heard each time that Zeus introduces a different god in Olympus.

I. “Hermes” – The messenger of the Gods across all frontiers
A very lively and fast music represents an agile and energetic god, very cunning. He is capable to travel around Earth from place to place without any trouble, disguising himself amongst other travellers, shepherds, traders, burglars and other mortals without raising any suspicion.

II. “Artemis” – The Goddess of nature and wild animals
This movement, composed as a dance form, describes the Goddess Artemis surrounded by live nature, birds and vegetation covering the surface of Earth beyond where the eye reaches. The animals pasture and run around freely amidst a clear and bright sky. Artemis dances and runs in this beautiful depicted scenery, carrying her bow and arrows and hunting down the wild animals.

III. “Hades” – God of the Death
A trip to the underworld can be very lonely and dark. A cold and deserted path will guide us to meet Hades, who is depicted in the music by a demonic ostinato, which will drive our ear crazy until it rips our soul apart.

IV. “Poseidon” – God of the Sea and the Earthquakes
We find ourselves in a peaceful and quiet sea where a soft breeze carries us, little by little, deeper into the ocean. There, a hunting horn is used to call Poseidon to reveal himself. The sea will become more and more unstable and rocky, and the waves will crush against the cliffs with more and more power, causing many rocks to fall into the water.

V. “Demeter” – Goddess of Agriculture
This movement reproduces the “chant of the mowers”, often related to the world of agriculture. It uses a simple melody created exclusively for Demeter, who takes care of the farmers and the fertile land. The movement of the butterflies´wings and the dialogue between the wind and the farmers will be a predominant feature of this movement. In essence, it is a movement on invocation to the Goddess of agriculture and carrier of the seasons.

VI. “Hephaestus” – God of fire and forging
This movement can be coined as “the smith´s hymn”. Hephaestus is venerated by all the smiths and craftsmen, who chant melodies to the beat of the anvils. Little by little, other sculptors and craftsmen will join in with their voices. At the very end, a big explosion of fire and ecstasy will carry the listener to the end of the movement.

VII. “Apollo” – God of beauty, music and perfection
Apollo, who is in charge of playing music at Olympus, will present us with a simple theme, first played with the horn and later by a small group of players from each one of the orchestra´s sections. This theme will be used as a welcome back tune for all of the Gods. It is very triumphant and solemn chamber music.

VIII. “Aphrodite” – Goddess of sexuality, lust and desire
Aphrodite, portrayed by the harp, is shown as a very appealing and sensual Goddess. She will hypnotise us little by little, using very colourful and enchanting melodies. We will fall under her arms, and with another theme in a waltz form, she will make our mind wonder into infinity.

IX. “Ares & Athena” – Gods of War
Ares and Athena travel together riding on their chariot pushed by four immortal bulls with golden flanges and breathing fire. They are equipped with helmets, shields and spears. These Gods are coming from afar, marching towards war and destruction, a ferocious massacre of blood and fire.

X. “Zeus y Hera” – God and Goddess of Gods
At the end of this suite Zeus y Hera will appear to the beat of the great “Zeus and Hera´s March”. They both parade together in their throne, transported by heavy wheels of stone. Acclaimed by all of the other Gods, they enter in Olympus, welcomed by fanfares of timpani and trumpets. They are Olympus´Kings!