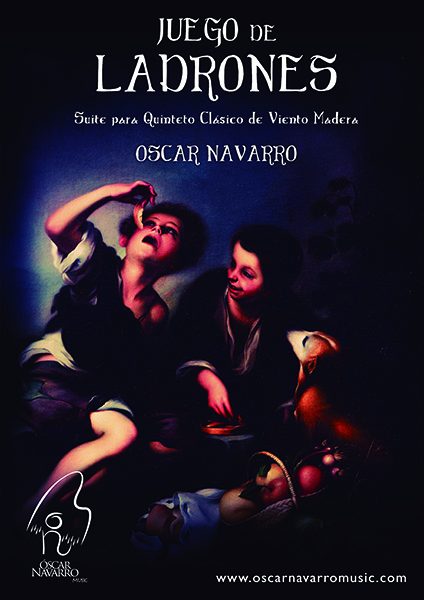 This story tells of the adventures of two young men about 15 years old, Pedro del Rincón and Diego Cortado, who leave their homes and families, meet each other and become friends at a tavern on the road from Toledo to Córdoba and decide to go in search of money and freedom. One day they join a group of travelers from Seville and there they meet the world of criminals and try to join it. They have no option but to appear before Monipodio, leader of one gang of thieves and who confers on them the names of “Rinconete and Cortadillo”.

With this suite, I have wanted to capture musically the essence of Cervantes’ work, describing the most important characters and locations of the novel, and leaving a door open for the imagination, since it would be almost impossible to musically capture all the escapades of Rinconete y Cortadillo.

The work is divided into five movements:
Movement I: THE DARK TAVERN
This section places us in a gloomy, cold and damp tavern, found on the road between Toledo and Córdoba. Mysterious and dark music serves as an introduction to a scene with a group of middle-aged men playing a game of cards. Prowling around in the tavern we find Rinconete and Cortadillo (the theme that leads to the Second Movement).

Movement II: RINCONETE AND CORTADILLO
A new section of the work in which the music describes the two protagonists of the novel; two young men dressed in old clothes and looking at bit disheartened. The picaresque style in this section makes us think that the story’s main characters will provide many surprises and adventures throughout the novel.

Movement III: SEVILLE
After the section dedicated to Rinconete and Cortadillo, we move on to a new section that tries to present the magic and color of the protagonists’ dream city: Seville. A section dedicated to this beautiful city covered with sun and the soft notes of an inspirational guitar.
Movement IV: GAME OF THIEVES
Once Rinconete and Cortadillo get to Seville they are surprised to see a group of young hoodlums running back and forth tossing stolen fruit from one to the other while being chased by the shopkeeper; and so the fourth movement begins in this section – the Game of Thieves.

Movement V: MONIPODIO
Following the Game of Thieves, the next section of the piece attempts to describe Monipodio, the chief of the gang of thieves. He is a man in charge of establishing and maintaining order and organizing the crooks in the city, among whom Rinconete and Cortadillo are already included.

In this last section of the piece titled GRAND FINALE, Monipodio offers our friends a place in the city in which to run amuck and where they will begin the escapades to follow in the story, a limitless story forged by one of the greatest writers in all history: Miguel de Cervantes.