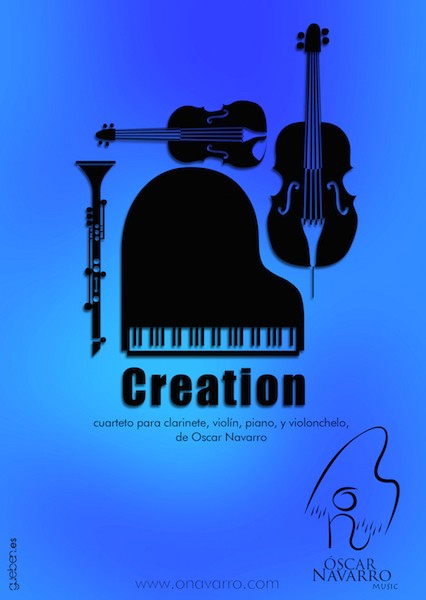 For “Jose-Franch Ballester and friends”

After endless questions to the composer by all interested in the exciting world of composition, regarding how and why music appears on a blank score, how are the first notes born, what is the process in the development of a work and especially how one feels and what is the process of inspiration in creating music from scratch, the answer to all this I wanted to show of course with music.
There are no words to describe the different states that any creator goes through at the time of embarking on a new piece; there is no better way for me but with actual music.
“Creation” attempts to convey the feelings of “emptiness” when confronted with a blank score, moments of inspiration from which springs music without knowing why, rhythmic or melodic cells that make the notes begin to move, and above all the different moods which the composer experiences when faced with the blank score.

• I Movement
In this first movement we see the following sections clearly framed in the score:
– “The mystery of the empty”
– “The idea”
– “Inspiration”
– “The climax of the day”
The beginning of the piece finds us with a blank score, empty, without any idea or reason to give us a clue of what the work will be about or what we wish to represent in this piece.
Only a dogged pursuit into nothingness and some improvised sound lines lead to the creation of that intangible state that is inspiration, that soon will come to light.
Little by little, after a tour through the imagination, new chords begin to emerge, new rhythms, ideas that will lead to the moment of creation, a moment when an idea comes, the “idea” that makes the music start to emerge.
Following a process of chaining melodies, rhythms, phrases, something takes shape. In an instant something fleeting gives rise to the moment of inspiration; a moment so coveted and so difficult to explain. Something that emerges like foam, as water droplets that are channeling all musical ideas to a climactic moment when the notes intertwine, slide, and form a “waltz” of infinite sounds to the finale.

• II Movement
– “The silence of the night”
– “The Dream”
– “Midnight notes”
– “Obsession”
The first section of the Second Movement attempts to envelope us in the solitude of the night, fleeting notes and melodies that arise at the most solitary time of the day.
The following section represents the times when rest becomes a seesaw of notes, motifs, and melodies that turn over and over in the mind and make the dream become part of the creative process.
Every creator has awakened with a burst or momentary idea that makes you interrupt your rest to capture these musical motifs in the middle of night.
Something very fleeting and ethereal represented here by the rhythm of the clarinet, piano and later, the cello.
In conclusion, the moment arrives when a passage becomes anchored in the subconscious becoming an idea or “obsessive” motif, a melody inseparable from you that goes with you to infinity creating ever more and more stress and despair.

• III Movement
This movement is completely liberated, when all the internal ideas take life. It is a clear example of “what happened” at the time of creating this last movement.