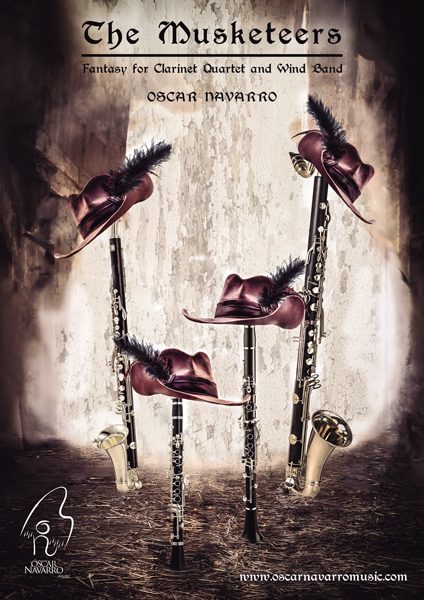 THE MUSKETEERS – Fantasy for Clarinet Quartet and Wind Band

For the Barcelona Clarinet Players

“The Musketeers” is a fantasy for four clarinets and Wind Band inspired by Alexandre Dumas’ novel The Three Musketeers.

With this fantasy I’ve attempted to musically translate the essence of Dumas’ work, describing the main characters of the work and leaving a door open to the imagination, since it would be impossible to musically narrate the entirety of the exploits of D’Artagnan and the other three musketeers.

The work is divided in 4 sections:

“All for one, and one for all”

This section introduces D’Artagnan and the three musketeers. Epic and grandiose music opens the score, introducing us to each of the musketeers even representing a demonstration of D’Artagnan’s and his three faithful companions’ skills.

After this main section, we continue with Louis XIII. This is a new much more calm and solemn section that evokes the sounds of the palace and the majesty of the benevolent King Louis XIII. This section is imbued with stately tones with the use of motifs drawn from the first section of the work, but this time with a more solemn and peaceful spirit that brings to mind the different rooms in the palace where Louis XIII lived day to day.

After the section dedicated to the French king, we move on to a new much more somber and mysterious section. A section devoted to one of the darkest characters in the novel, Cardinal Richelieu, a dark section, a song to evil and the negative aspects of ecclesiastical powers.

Finally, the last section of the piece leaves a door open to adventures and imagination. After this section describing the principal characters, the music takes a much more vigorous, more adventurous turn. Our group of personalities begins its escapades at this point and thus ends the work. However, it leaves open the possibility of a new chapter to follow…. a story without limits forged by one of the greatest writers in history: