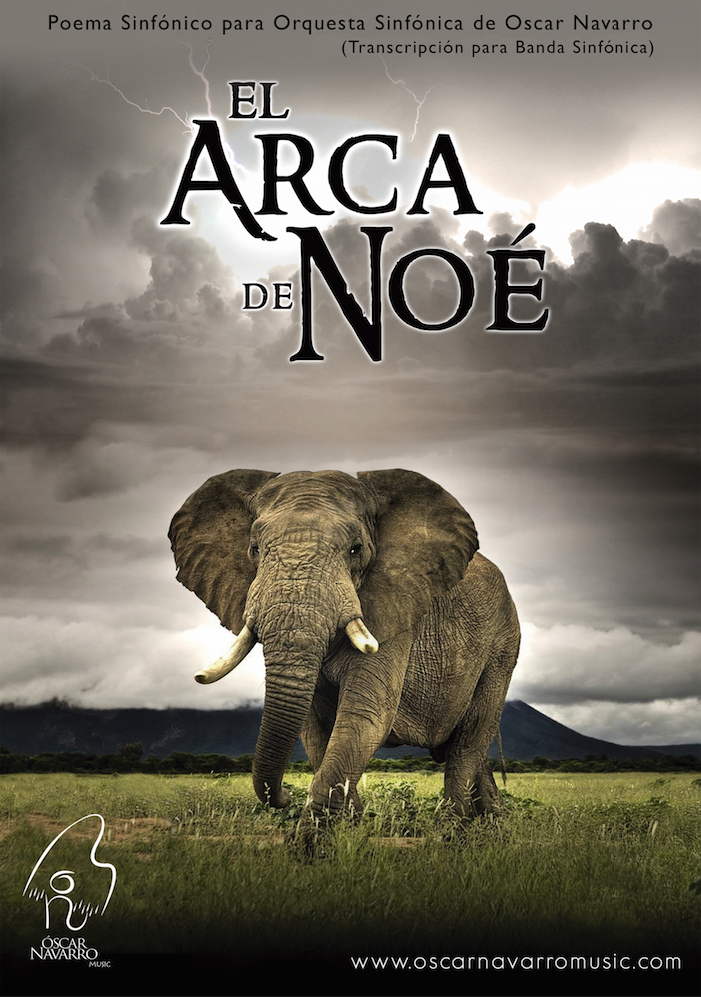 The symphonic poem is clearly divided into 10 sections with different descriptive passages of the Ark of Noah. These sections are:

(measure 1 to 48) On the Mountain
During these beats music puts us in a distant mountain where Noah is (melody played by the English horn) receiving the tragic news of the great storm that will destroy the earth completely. After a few minutes of emotional music, the image brings us closer to a more detailed plan of God’s words to Noah in…

(measure 48 to 65) The Word of God
The lower section of the orchestra incarnate God directing his last words to Noah with the background sound of bells of heaven. After his last words had to observe the animals that inhabit the land behind the eyes of Noah.

(measure 65 to 80) The land of the Beasts
After the profound words of God to Noah, we now see a land completely populated by a multitude of animals, which you can hear the elephants, represented by the glissandos of the section of french horns, etc. .. under an incessant rhythm of the drums that immerses us in a more extensive valleys which shows the animal kingdom.

(measure 107 to 119) The Birds
Over the next few minutes the music broadly describe the different families of the great animal kingdom that populate the earth, beginning with the birds …

(measure 119 to 155) The life of the sea
For these bars the music plunges us into the great ocean populated by dolphins, whales and other creatures that inhabit them describing the wonderful sea bottom, with the incessant play of the dolphins and other animals…
After this section, the music fades until the night covers the whole face of the earth (the distance the bells announcing midnight). Once the animals on the ark with Noah and his family just need to wait for the great flood down upon them …

(measure 155 to 204 ) The Ark at nigth time
A warm melody provided by the English horn and light interventions with a flute and piccolo mimicking the whistling of birds, we now stand in the ark.
During his last hours on earth, hear the soft melody provided by the clarinet, bassoon and then finally the tenor solos that burst into a great fortissimo of the entire band, interrupted by small raindrops advertise …

(measure 2004 to 259) The Storm
For a few seconds you can appreciate the sound of frogs (Wiro) and others, including the first drops of rain, and suddenly a first beam (bar 210) announces the great disaster… The Great Flood (218 bar…)

(measure 259 to 262) Destruction
The image of the great flood situation we are now out of the ark, a huge storm is completely destroying the earth, the wrath of God has no boundaries and destroys everything in its path (in these seconds of music you listen to the melody with the work that had previously offered by the horn and now with a great fury and claw with severe band).

Again we return into the ark (Compass 263), listening to the general nervousness and especially the sound of elephants, again played by the horn section.

At bar 277 back to the outside of the ark, where after a few bars of the bells obstinato supported us to the big bang (beat 288) and end of the Great Flood.

The calm comes and disappears into the horizon ark under only 2 clarinets that lead to an infinite pianissimo.

(measure 311 to end) The new earth
After the great catastrophe, a new world opens the eyes of Noah. This gentle melody played by the horn and the whistle of the Dove (portamento of the flute) in the distance, heralds the resurgence of new valleys and plains in the eyes of the future inhabitants of the earth.

With a relentless march rhythm and gentle waves of the flood waters in the earth, the ark is directed to the new land, the revival of an unspoiled paradise is blessed by God (Compass 363) and offered to Noah and his family.

…He spoke then God to Noah and said, “salt of the ark, you and your wife, your sons and your sons’ wives with you. Bring out with you and every living thing of all flesh-birds and beasts and every creeping thing that creeps on the earth fruitful and multiply on it”