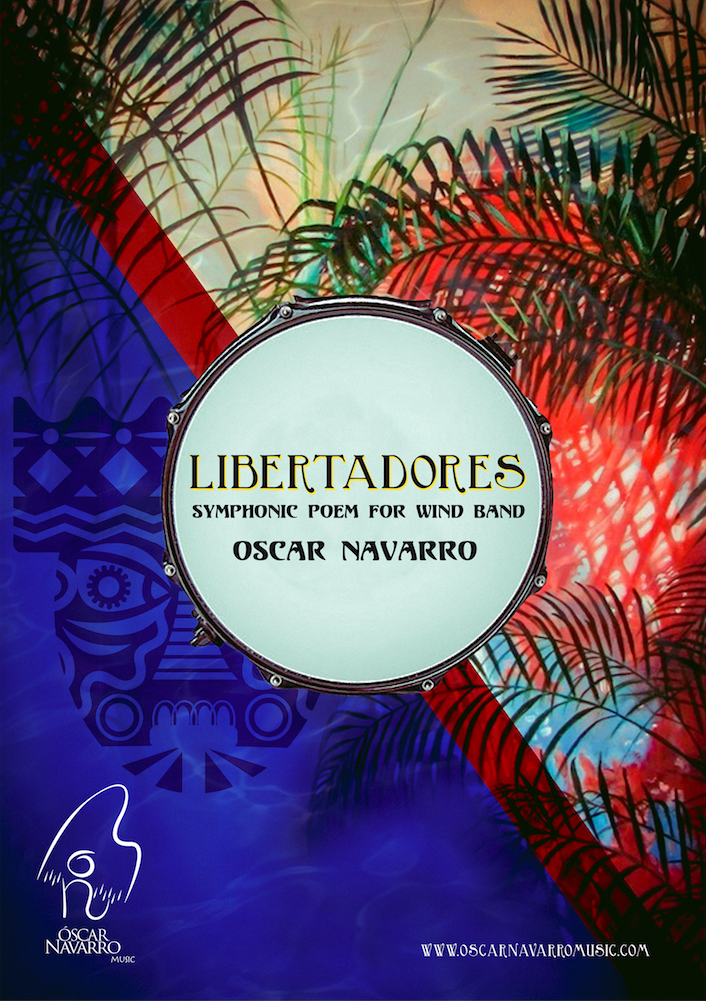 For Concert band by Oscar Navarro

This piece was commissioned for the 39th Wind Ensemble International Competition “Vila d’ Altea” and “Cultures of America”, and its performance was mandatory for all of the contesting ensembles. It undoubtedly gained the spotlight at the festival.

“Libertadores” is divided in two sections, the first part inspired by the Amazon River and the second by the so called “ separatist leaders” of South America, Simon Bolivar and Jose San Martin.

The first section attempts to introduce us into the heart of the Amazon Forest, with its most characteristic landscapes, indigenous tribes, sounds and so on. The use of voice and hand percussion as part of the performer’s tasks becomes an indispensable tool when trying to emulate the tribal chants, and it adds an interesting touch of color to the piece.

The second section is fully devoted to portray the separatist leaders, in the form of a March-Fanfare. The main theme of this section, very martial and triumphant, travels across the different instruments of the ensemble. Finally, a explosion of sound, caused by marching drummers, elevate this theme of liberators, and the audience, to the climax of the piece, which is also its end.

Both the visual and musical content of the piece are equally fundamental when it comes to transmitting to the audience this idea of submerging into the heart of the Amazon Forest. It is crucial for me that the musician enjoys the music he/she plays, and that the content of the music, as well as the sounds, result in an attractive response from the audience.

My ideology about music is to seduce and captivate both musicians and audience through sensations, not to capture them into what they are hearing and/or performing. A seduced audience will always be likely to come back to get the nectar/music that has been offered to them. An audience that has been captured by the strength of the music, sooner or later will no longer be interested.

Libertadores has all the ingredients for enjoyment and for generating an explosion of emotions that will get to any person with a little bit of sensibility. It will allow the musician to have a set of tools that will facilitate his/her process of transmitting ideas to the public. This was and still is my intention with Libertadores, and with most of the music that I like to create.

Everyday represents a new challenge of improvement when I start to write the first notes of a new piece for band, orchestra, chamber group and cinema, or any other genre that will allow me to express my feelings and emotions; my favorite mean for communicating is of course MUSIC.